This is one of my favorite patterns to swing for Steelhead in the Salmon River, NY.  I tend to lean towards brown and purple the most, but olive and black work very good as well.  Pink is also a good color to try.

I've had success with this during the early salmon season as well as the fall and throughout winter.  I don't fish for steelhead during the srping, but I've been told by friends that this patterns works during that time frame too!!

I typically fish this fly with a 10ft polyleader in various sink rates depending on the flow.  I also use a 3ft-4ft piece of airflo sightfree fluorocarbon in 10lb or 12lb test.

I fish the fly on a down and across swing and hang on!! Tightlines!!

Gliss-N-Glint is a synthetic material made by Deer Creek and it is most used for creating baitfish patterns for fresh and salt water. At the time I tied this I had never seen any synthetic material versions of the Intruder so I thought I would give it a shot. I first tried this fly for steelhead a few years ago and they approved this color combination as well as a few others. 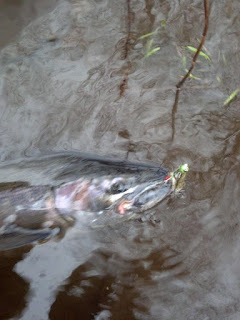 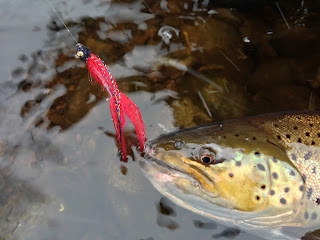 Posted by Franks at 1:59 PM No comments:

One of my favorite patterns to swing for fall and winter Steelhead in the Salmon River in Pulaski, NY.  This pattern can also be tied without the eggs and it will fish very well.  The recipe is at the beginning of the video.  Cast down and across and hang on!!  Don't be surprised if it entices a few brown trout as well.

Posted by Franks at 1:12 PM No comments:

Working on another crayfish pattern for Steelhead and I based this one on Dave Pinczkowski's "Swing Cray" pattern.  This should also be good for smallmouth bass since the original pattern works well on them.  Going to work on a few other natural color combinations with and without the egg in the rear 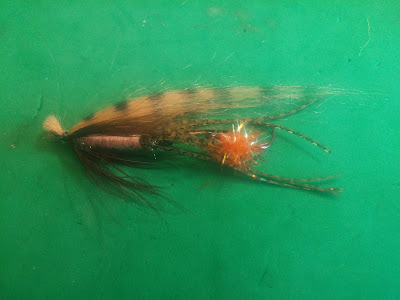 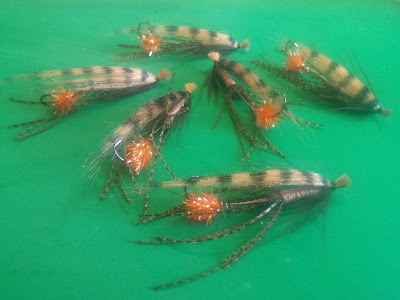 Have Your Heart Behind It!!

In the past 5+ years, a lot has changed with spey fishing whether you are using the long rod or a switch rod. There are definitely more people giving it a try, but many of them don't have their heart behind it and are relying on buying things to help them in their quest for success. Don't get me wrong, some things will help, new toys are cool, but at the end of the day it comes down to knowing the river, reading water, how the fish behave, and making every cast count......even the bad ones.

Some people don't like to admit defeat or failure and that is a bad thing when on the quest for knowledge. If you can't be honest that you made a mistake than how can you learn from your mistakes? Lets take spey casting for instance. I bet many of you have heard someone say that this line isn't right for my rod or this rod isn't for this type casting etc... It's pretty easy to match spey rods and spey lines in this day age, but you hardly hear any one blame bad casting on operator error even though that is typically where the problem lies. Be honest with yourself and take the time to practice during the off season. Maybe hire an instructor or have a friend video your casting so that you can compare your stroke to an accomplished spey caster.

Almost all of the people that I know that are good at spey casting didn't learn everything on day one. In fact, all of them are still learning and continue to practice during the off season and put what they have learned to use during the season. It's a never ending journey if you continue to learn and it will also be an interesting journey if you make it a point attack your weaknesses. If you don't, you'll be stuck in a rut and resort to buying more gear you probably don't need.

Make the Bad Casts Count
Not every cast is going to be perfect or turn over how we would like it, but that doesn't mean cast and cast again until it looks pretty. Fish don't care how pretty your casts are, but they do know a well presented fly when they see one. So you've a made decent cast but it didn't turn over how you would have liked. Well, make the best of it. You might have to strip some line in to get the line tight. Maybe you'll have to make a big mend upstream or downstream. Do it and fish the fly out to the dangle. Sometimes that bad cast might be the perfect cast, but we won't know it until we fish it through. If you do get a take, remember how the scenario played out. Was it a downstream mend that got the fly more broadside and sped the fly up during the swing. Maybe it was an upstream mend that let the fly sink a little deeper and helped the fly swing slower throughout the swing. Try it again, the fish might be giving you a big hint as to how they want the fly presented that particular day.

Some flies may seem to work better than others but I don't think there are any magical flies or silver bullets that will always get a tug and bring a fish to shore.  I think a lot of it has to do with what flies we have gained confidence in over the years and we fish those flies with our heart behind it, meaning that we are not focused on the fly pattern being used, but more focused on reading the water and making good casts and swinging the fly with confidence.  Obviously it takes some time to get confidence in your flies so instead of having every type of fly, focus on a few proven patterns for the river you fish.﻿
Posted by Franks at 11:04 AM No comments:

Time to Start Getting Ready for Fall and Winter Steelhead

Well it's that time of year again when the summer temps are hot as blue blazes and I have cold water and dancing steelhead on the mind.  What's a better cure for the summer duldrums then tying flies and re-stocking the fly boxes......as well as getting new line for the spey rod!!

Lateley I have been tying some feather wing spey flies such as the Compactor Spey (named after the Compactor hole on the Salmon River) and some Mahogans which are one of Dec Hogan's patterns that works very well on the Great Lakes Steelhead Rivers.  I typically tie these on Daiichi size 1.5 Alec Jackson Hooks, but they can be tied on size 3 and size 5 as well.  These patterns can be tied tubes and shanks too!!

I also had some leftover Gamakatsu Hooks in size 4 colored red and size 6 colored green, so I decided to play around with some small soft hackle style flies in various colors to have something a little smaller to swing in low water or in the slow water.

As far as the line I just recieved, it is the Snake River's Ballistic Vector XL series in 8/9 wt which has a belly length of 65'-0", a total line length of 125'-0", and weighs 660 grains.  I chose this spey line since I had been using the CND Gravity Point spey line which has a 70'-0" belly and weighed 671 grains.  As you can see the specs are very close so I think this will be a good match for my rod when either fishing dryline or using polyleaders. 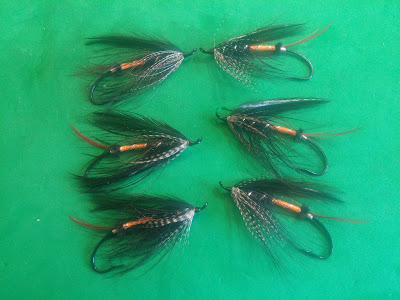 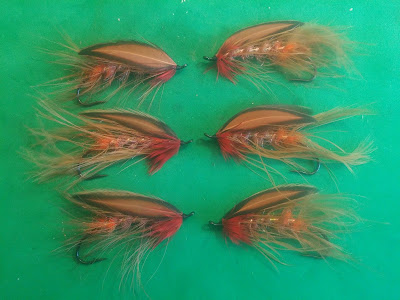 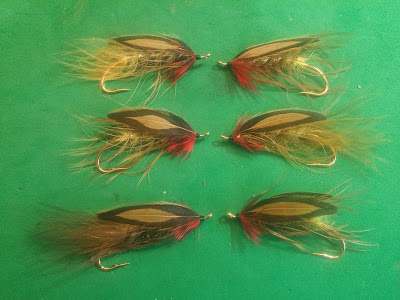 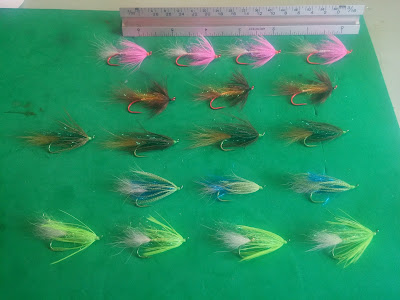 Since it's time to start getting ready for the fall and winter steelehad season here are a trio of Twilights.  The originator of this pattern is Mark Waslick.  I went by the picture in Bob Veverka's book, so the pattern is not exactly accurate.  There is a recipe in "steelhead flies" by Dick Stewart and Farrow Allen.  All of these are tied on size 2 Blue Heron hooks. 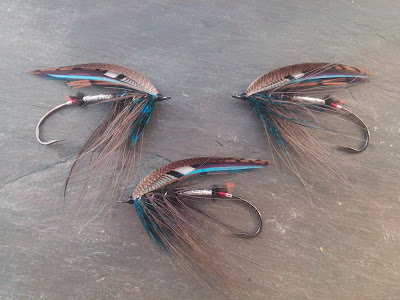